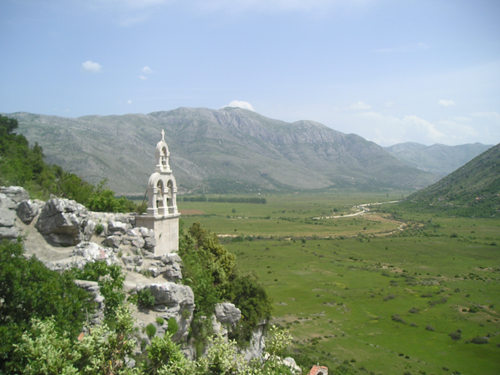 Description: Popovo polje is a karst field in the south of Bosnia and Herzegovina. Administratively, its surface is divided into three municipalities – Trebinje and Ljubinje in Republika Srpska (RS) and Ravno in
Federation BiH (FBiH). Non-existence of a unified national ministry for agriculture, ecology and energetics
results in a chronic lack of co-ordination between the state, entity and cantonal levels, inclusive of competent ministries, public enterprises and agencies on entity and cantonal levels directed towards the prevention of floods. This Project will open up the room for communication of all stakeholders but will also address capacity building of civil society aiming to strengthen its political representation.

Objective: Strengthening the role of civil society by initiating dialogue in the Popovo polje to consolidate equally political participation and representation of agriculturists for both women and men.

Activities realised in 2011:
1. Initial meeting with key actors;
2. First informative Roundtable with key actors was held in Čapljina on 27th April 2011 in Hotel Mogorjelo. That was the first opportunity to gather all stakeholders so to initiate a dialogue on the project issue and the problem of flooding. 19 representatives of relevant agencies, ministries, institutions and municipalities were present at this Roundtable, where upcoming project activities and other relevant information related to Project
were presented. All those present expressed their interest and positively responded to this initiative.
3. Assessment of needs for enabling municipal employees, cooperatives and associations. This activity was implemented by Local Democracy Agency (LDA) Mostar. Apart from 8 training modules already defined by the Project, there are other modules, which have been defined on the basis of training needs assessment. In the
conclusion of the survey results, a constant need for education was suggested, so to build the capacities of representatives of municipalities of Čapljina, Ravno, Ljubinje and Trebinje and citizen associations active in those municipalities. Three other modules were also defined.
4. Analysis of the legal framework on the level of BiH related to the entity laws on water and obligations and responsibilities of local authorities in FBiH and RS about
this issue.
5. Local Democracy Agency Mostar, within the POPoWO Project organised in Ljubinje on 13th July 2011, training on the subject of “EU Funds and IPA for Bosnia and Herzegovina”. This was the first training organised within the Project framework and its aim was to introduce representatives of municipalities of Čapljina, Ljubinje, Ravno and Trebinje, representatives of public institutions, non-governmental organisations, hunters’ associations and agricultural cooperatives to the structure and conditions for receiving
EU funds. Some of the subjects that were elaborated were as follows: Instrument IPA 2007 – 2013, EU funds: Support to the realisation of common EU policies, community programmes, 5 components of IPA funds, component 1 “Support to the transition and institutional building” (structure, political conditions, socio –
economic conditions, European standards, beneficiaries), component 2 “Cross-border co-operation” (purpose, programmes and beneficiaries); 6. Second Round table was held in Trebinje on 14th December 2011 in Hotel Leotar. There were 21 participants in total. Information gathered during the previous meetings in Mostar and Trebinje were used as the basis for further discussion in between the key Project participants. As one of the subjects that were discussed at the Round table was a draft of a Memorandum of Understanding. By signing the Memorandum of Understanding, an informal network of Project participants, who would later on work on the development of an Action Plan for flood protection system, will be established. All participants expressed interest for better co-operation and agreed that the exchange of information is the key for flood prevention;

8. Local Democracy Agency Mostar, within the POPoWO Project, organised two-day training on the subject of “Project Cycle Management – PCM 1“. The training was held in the Business Incubator in Trebinje on 12th and 13th December 2011. The aim of the two-day “Project Cycle Management – PCM 1” training was to introduce the participants to the skills necessary for development and preparation of a project proposal. Project ideas were generated by the participants themselves. Some of the subjects elaborated at the training were: What is a project proposal, development of an idea into a project, strategic and opportunistic approaches to the
development of a project, project cycle management (objectives, results, indicators).

9. Upon the development of guidelines and preparation of a packet consisting of an application form, financial and narrative reports, logical frame and evaluation questionnaire, Project team initialised a Call for project proposals. The Call was open from 30th December 2011 to 15th February 2012, and was intended for citizen associations and nonprofit organisations from the municipalities of Trebinje, Ravno, Ljubinje and the area of
Popovo polje.

Upon the development of guidelines and preparation of a package containing an application form, financial and narrative report template, log frame and evaluation form, the Project team initiated a Call for
project proposals. The Call was open from 30 December 2011 until 15 February 2012 and was intended for citizen associations and non-profit organisations coming from the area of Trebinje, Ravno, Ljubinje and
Čapljina Municipalities and the area of Popovo polje.

This was a two-day training workshop held from 30 to 31 January 2012 in Trebinje. The training was attended by fourteen (14) and eleven (11) participants on the first and second day of workshop respectively. The objective of the two-day training workshop “Project cycle management – PCM, part II “ was to equip the participants with the skills necessary for the development and preparation of a project proposal, by working together under the guidance of trainers on developing the elements of a project proposal. The second part of the training focused in particular on budget development, activity chart and timeframe and logical framework. The ideas for projects were generated by the participants themselves.

Within the “POPoWO“ (People Organize Prevention of Water Overflow) Project, which aims to establish a more clear dialogue of all stakeholders in prevention of water overflow in the area of Popovo polje, a third Roundtable was organised in Hotel Mogorjelo in Čapljina on 03 May 2012. On the basis of the previously held roundtables and conclusions reached, this one served for the continuation of the discussion about the problem
of flooding of Popovo polje, which also affects the surrounding municipalities and possible solutions for prevention of that problem and reducing the damage already made. Apart from that, once again the guidelines for establishment of an informal network of Project stakeholders, including all relevant bodies from the institutional level and four municipalities, whose aim would be to, through mutual co-operation and exchange of information, establish better communication and co-ordination of competent bodies so to minimise the problem of area flooding, were presented.

Evaluation of the proposals received

After receiving project proposals from citizen associations and non-profit organisations from Čapljina, Ravno, Ljubinje and Trebinje Municipalities, a team for evaluation of the proposals was formed. It was comprised of the representatives of municipalities included in the POPoWO Project, and representatives LiNK Mostar, Centre for Development of Herzegovina (CRH) and Local Democracy Agency Mostar. The task of the Evaluation Commission was to assess the proposals received and monitor the process of implementation of the approved small scale projects. Eleven project proposals were received, while seven of them were positively assessed and therefore eligible to receive a grant. We must mention that € 20000 was allocated for the needs of the small grant scheme, with a minimum of € 2000 and a maximum of € 3000 per small scale project.

Agreements on implementation of small scale projects were signed on 05 March 2012. Mutual obligations of the contractor and organisations granted the funds were regulated by an agreement, which is in accordance with the BiH legislation. All projects that were approved had to be implemented within a three-month period.

This was a two-day training workshop held from 14 to 15 May 2012 in Trebinje. The objective of the two-day training workshop “The importance and techniques of citizens’ participation in the planning process – Participatory planning process “ was to introduce participants to the importance of planning and techniques of a participatory process. The training began with the presentation of a planning process in general and its importance to local communities. Methodologies and differences between action plans and strategic plans were presented and discussed in detail with the participants. The next topic was participation as a process of gathering the views of a variety of stakeholders, particularly those whose interests may be at stake, and ensuing decision-making process that takes such, sometimes conflicting, views into account. The participation is also seen as a vehicle for embarking upon changes that bring about changes and benefits to the local community.

Fundraising
This was a two-day training workshop held from 25 to 26 June 2012 in Trebinje. The objective of the two-day training workshop “Fundraising“ was to introduce participants to the importance of fundraising, its strategy and long-term planning of the process. The Workshop addressed the fundraising notion in general, methodologies and differences between opportunistic and strategic approach to fundraising, importance of developing relationships with the donors, presentation of the elements that an organisation needs
to have to be able to build a relationship with a donor as well as a presentation of notions of sustainability and self-sufficiency of nongovernmental organisations and how to achieve it.

The fourth Roundtable, organised within the People Organise Prevention of Water Overflow Project, was held on 28 June 2012 in Hotel Leotar in Trebinje. Small scale projects which were approved for seven NGOs that had applied to the Call published within the POPoWO Project from the area of Čapljina, Trebinje, Ravno and Ljubinje Municipalities were presented at the Roundtable. Also presented was the Memorandum of Understanding, signed by the nongovernmental associations, which aims to strengthen the role of civil society in initiating dialogue in the area of Popovo polje so to ensure participation and representation of farmers
and the rest of the population in the decision-making process, public advocating of efficient co-operation and communication between the key interest groups from the area of Popovo polje in undertaking measures for prevention, limitation and reduction of damaging consequences of the small and large waters in regards to flooding agricultural land and establishment of continuous co-operation of civil society and governmental sector stakeholders. Based on the information received at previously held roundtables and meetings, final version of the Action plan for contesting the floods was also presented.

Designing and printing out of brochure containing results of the Project

Some 500 brochures presenting results of POPoWO Project were produced in early September 2012 and they were launched during project Final Conference on 26 September 2012 in Mostar. Prior approval for producing and brochure content itself was approved by the Delegation.

Final Conference of POPoWO Project was held on 26 September in Hotel Ero, Mostar. Activities and results realised during the Project duration. All stakeholders included in the POPoWO Project participated in the work of the Conference (municipal mayors, representatives of electrical power enterprises, representatives of citizen association from the Project area and a representative of the Delegation of the European Commission in BiH). The POPoWO Project was very positively evaluated by all participants, while the need for further
activities related to prevention of floods in Popovo polje was emphasised.