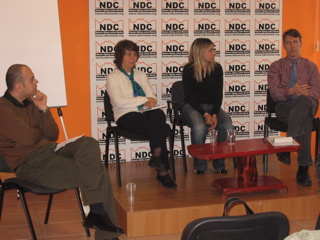 Donor: Permanent Representation of Luxembourg at the Council of Europe

This project is addressing young people who attend secondary school and aims to make aware teachers of secondary school to the importance to teach values such as democracy, interethnic dialogue, rights of minorities. It is seems to be important to work in Mostar with secondary school because after the war most of high school in town are, non officially, but effectively organised in ethnic basis. To foster the working together in the secondary education and the discussion about a possible unification of curricula is an important challenge to face.

Four workshops (both for teachers and for students) were held within the project and each workshop had a different theme, i.e. democracy and democratic principles in education, respect for human rights in high schools, dialogue and introduction to conflict analysis, how teachers can foster confidence building among different ethnic groups. The project was finalised by a conference on which recommendations of the workshops were discussed. Each workshop hosted around 20 participants, i.e. students,
teachers, international guests and politicians.

The recommendations of the workshops are:

Project was prolonged in 2007

CBM II – Confidence Building Measures, to foster interethnic dialogue in the secondary schools of Mostar and its region

Activities planned for the implementation in 2008:

Preparation of a final handbook with research findings on learning values ​​such as democracy, human rights, dialogue and respect for human rights in Mostar high schools.